How to Have a Kicking Super Bowl Party

It’s that time of the year again. Sports, lots of food, the half-time show, the commercials, and the parties; which means that there will be a lot of households planning it big Super Bowl weekend. A big party does not mean that you should go overboard, but if you’re a smart planner and want to save money and increase the fun then here are some strategies to consider to kick-off your party right.

Have a potluck. Just because you are hosting the party does not mean that you should be in the kitchen missing the game. Ask people that you invite over to bring a dish or provide some of the beverages and snacks. Doing this will reduced the amount of food and drinks that you will have to provide. Create a buffet of snacks and finger foods so that you don’t miss any of the action.

Go generic. There is no reason to spend a lot of money on brand name items to host your Super Bowl party. Some generics taste better than brands. You can even go one step further and make some of the snack items yourself, like the dips. Make rotel, bean and ranch dip from scratch.

Slow cook before game time. If you are wanting to have some warm comforting meals for your guest try using a slow cooker. You can even buy a 3 pot slower cooker now to make some of your dishes and keep them warm throughout the game. Dips, meatballs and soups are a great idea to throw in the cooker. 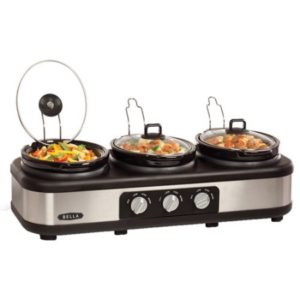 Don’t order out. Instead of ordering pizza, which is a fan favorite during the game, purchase frozen pizza from the grocery store. I would advise going with a brand than the generic.

Visit warehouse clubs. If you know that you are going to have a lot of people over then save money by shopping at places like Costco and Sam’s Club. Buy the food and drinks that you need in bulk. It would be a lot cheaper than heading to your nearest grocery store.

Have options for alcohol. During Super Bowl season, many stores will have sales on beer, wine, and hard liquor. Check out warehouse clubs, grocery stores, liquor stores, and even convenience stores for the best deals and make sure that you purchase what you need before Sunday’s Super Bowl party. In many states you cannot buy beer, wine, and liquor on Sunday.

Make the game day experience more interactive. If you have multiple televisions then bring them all in one room. Create a sports bar atmosphere for you and your guest. The game can me watched any angle and your guest can move around instead of being constricted to one space. If you are looking to invest in a new television the time to buy is now. Many stores will have deals on TV’s leading up to the Super Bowl.

Use plastic. Don’t waste your time washing plates after the game ends and everyone leaves. Head over to your local dollar store and pick up some game day supplies. Most dollar stores sell sport themed plates and decorations. No need to spend a ton of money on a once a year event.

We hope these strategies helped you in planning your Super Bowl party. If you have any ideas or suggestions please leave us a comment. Enjoy the game!